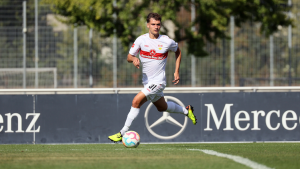 Midfielder Mateo Klimowicz has joined Mexican club Atlético San Luis on loan with immediate effect until December 31, 2023. Klimowicz’s loan deal with Arminia Bielefeld, which was originally due to run until the end of the current season, was terminated ahead of schedule. The 22-year-old’s contract with VfB Stuttgart runs until June 30, 2025.

“For Mateo, it was mainly about getting competitive match practice,” said VfB Stuttgart sporting director Fabian Wohlgemuth. “We found a very good solution with Atlético San Luis. We’re convinced that Mateo will quickly settle there and will be given the opportunity to take another important step in his development. We wish him all the best and every success on this path.”