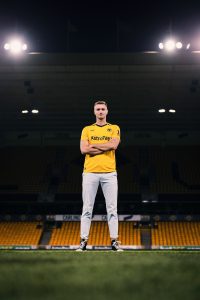 The 25-year-old arrived in Wolverhampton to complete his medical at Compton Park earlier today and joins the club on a five-year-deal, with the option to extend for a further 12 months.

The 6ft 7in striker, who has been capped 15 times by his country, moves to Molineux on the back of two full Bundesliga seasons where he finished VfB Stuttgart’s leading scorer each time, hitting a total of 23 goals.

Capable of finishing with either foot, Kalajdzic is willing to run behind, and has proved an astute finisher over recent years, as well as being a natural threat in the air for both club and country.

Kalajdzic has developed recently in the Bundesliga, but started in his home nation, with Admira Wacker taking him from SR Donaufeld Wien as a youngster and presenting the chance to impress in the Austrian Bundesliga.

Promoted to the senior side in 2017, the striker hit 12 goals for Admira Wacker, leading to a 2019 Stuttgart transfer, which started with a cruciate ligament injury, but proved to be a successful move.

To date, the 2020/21 campaign have been Kalajdzic’s most productive, after he bagged 16 times to finish the division’s sixth top scorer.

Having chalked up three appearances during the opening weeks of this season, Kalajdzic has now made Molineux his new home and will wear the number 18 shirt.

Wolves technical director Scott Sellars said, “We are very happy to secure the signing of Sasa, who is a talented young striker, has many excellent attributes to his game and fits the profile that we have been looking for this summer.”

“Sasa has had great success in Germany’s Bundesliga, and we are looking forward to seeing what he can do in the Premier League.”