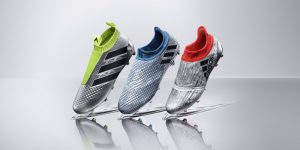 adidas Football on Friday unveiled the Mercury Pack, a cutting edge range of boots inspired by the trophies that players around the world strive to win in order to write their names into the history books.

The three unique chrome boots have been designed to embody the focus and desire that footballers have to achieve success and beat their rivals to finish first in order to claim the biggest prizes in the sport. The three boots – X16+ PURECHAOS, Messi 16+ PUREAGILITY and ACE 16+ PURECONTROL – will be worn for the first time by star names including Leo Messi, Paul Pogba and Gareth Bale during the UEFA Champions League final, UEFA Euro 2016 and Copa America.