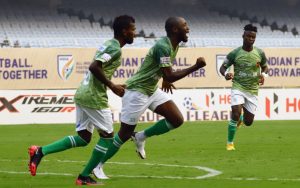 Around 11 years ago, a certain striker from Ghana named Asamoah Gyan missed a crucial penalty in the 2010 FIFA World Cup quarterfinal against Uruguay, but still went on to make history by being the highest international goalscorer from his country.

Fast-forward to the present and another Ghanaian marksman, Dennis Antwi, missed a penalty in a I-League clash between Gokulam Kerala FC and RoundGlass Punjab FC, but still made amends by scoring a brace that eventually helped the team from Kerala come back from 1-3 down to win 4-3.

Antwi may be new to the realm of Indian football, but the 28-year-old has been inspired by none other than his idol, Gyan, to ply his trade in India.