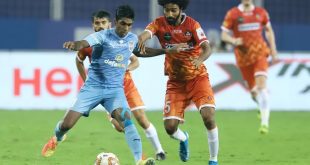 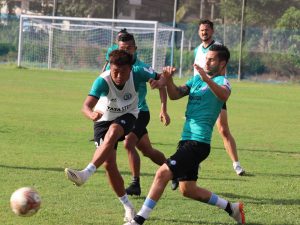 Jamshedpur FC suffered yet another setback after they were defeated by FC Goa in their last game. The fixture was electrifying with both teams aggressively looking to take advantage of the given opportunities, but FC Goa outplayed the 10-men Jamshedpur side to snatch away the victory with three goals in their bag whilst denying every opportunity produced by Jamshedpur. The night ended with Goa moving up to the third position and Jamshedpur FC stepping down to seventh position in the league table.

After the disheartening loss, Jamshedpur FC is now focused to get back to winning ways and bag a victory in every upcoming match, starting today as they play NorthEast United again. The race to the top 4 is still on and Owen Coyle and his men are eager to push past the losses and move forward. They will be playing their first home game of 2021 at Tilak Maidan after two away games back to back.

Previously, the Men of Steel have gone head-to-head with the Highlanders seven times, with the last fixture being played in December 2020. The last time both teams shared the pitch, Jamshedpur dominated the 90 minutes with all the statistics leaning to their side. The game ended with a 1-0 at full time after a strong defensive showcase by the team and they (Jamshedpur FC) walked out victorious with three points in their bag.

Currently, both teams are positioned right next to each other; Jamshedpur FC is in seventh position and NorthEast United FC is in eighth position with just a point’s difference. The Highlanders too, did not have a great start to 2021 as they lost two games (against ATK Mohun Bagan & Hyderabad FC respectively) and drew one (with Bengaluru FC) in their last three matches. On the other hand, Jamshedpur FC with two losses in the second leg, will be aiming to score a win and continue their race to the playoffs.

Both teams with some talented signings like Benjamin Lambot, Idrissa Sylla, Luis Machado (NorthEast United FC) and Jackichand Singh, Stephen Eze, Peter Hartley, Nerijus Valskis (Jamshedpur FC), will be going toe-to-toe for the second time and aim to outperform the other to grab the three crucial points.

Without Alex Lima’s crucial presence in the midfield and given the one point difference between both teams in the points table, it’s safe to say that this will be a nail-biter of a match, keeping the fans glued to their screens.

Jamshedpur FC will be facing NorthEast United FC at Tilak Maidan today. Tune-in to Hotstar and Star Sports Network at 5pm for the live telecast.