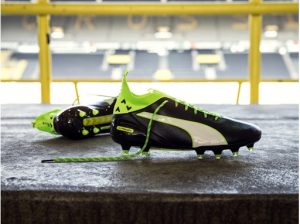 The history of this sport has been defined by unrivalled skill and unstoppable leather boots. It’s an undeniable equation. (Think Diego Maradona and the PUMA King.) As football became faster, boots became lighter. Faster. Louder. They were stripped of the materials that built this game.

PUMA set out to find a lighter, faster, louder leather solution. And PUMA did. Because that’s what PUMA does. PUMA innovate in places where others dare not play. PUMA take chances and turn up the volume. PUMA never say never and PUMA forever challenge the status quo.

The result is PUMA evoTOUCH, a new leather boot with unrivalled control and exceptional touch. Most boot designs begin with the moment of contact with the ball. Not PUMA. PUMA examined the concept of touch from the inside out. PUMA focused on what the foot really needs – and doesn’t need – then worked their way to the upper. The result is a boot that enhances and encourages the creative playmaking that puts footballers such as Marco Verratti, Santi Cazorla, and Cesc Fàbregas at the top of their game.

evoTOUCH is made for the creative and engineered for playmaking. It features an ultra-thin, lightweight K-Touch leather that offers exceptional touch in all conditions and brings the ball as close to the foot as it gets. The innovative, form-fitting evoKNIT socks engineered knit construction further enhances touch by being very close to the foot for a barefoot feel. The evoKNIT sock also creates a snug, secure fit for optimal performance. PUMA’s signature GripTex pattern prepares you for every move you need to make with its multi-directional design and prevents the foot from slipping inside the boot. Finally, midfoot stability is reinforced by the outsole’s raised SpeedTrack spine.

This new evoTOUCH boot puts magnetism onto the pitch. It forces the ball under your command. It’s built for lighter, faster, louder football.

It’s ready to kickoff a new era in that skill plus leather equation.