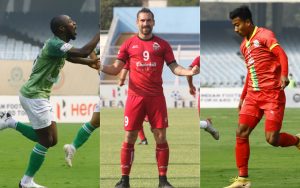 With just the last round of fixtures remaining, three teams – Gokulam Kerala FC, TRAU FC and Churchill Brothers – are in the running to be crowned champions of the I-League 2020-21. The title could very well be decided with the last kick of the championship, with two matches featuring the competing sides set to kick-off simultaneously on Saturday, March 27 at 5pm IST.

Leading the charts is none other than TRAU FC’s Bidyashagar Singh, who has 11 goals to his name so far. Behind him are two foreign imports – Churchill Brothers’ Luka Majcen and Gokulam Kerala FC’s Dennis Antwi with 10 goals each.

Here are some of the best goals from the trio!