Press Release 2020-11-19 Bundesliga Comments Off on Werder Bremen rewarded for their social impact in their city! 278 Views 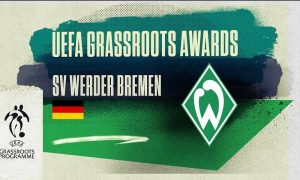 Yet their social impact has grown impressively this century after they became the first football club in Germany to establish a community programme and create a partnership initiative with schools, the ‘100 Schools, 100 Clubs’ project set up in 2002.

Today, Werder’s social engagement work includes projects for people with disabilities and for refugees, and a walking football initiative for the over-60s. On top of that the club has not lost sight of the importance of its long-established grassroots football programme, with 22 grassroots teams run under the supervision of around 50 coaches (female and male).

Werder’s recognition by UEFA follows, above all, the success of its ‘Ball Schools’ scheme – or Ballschule – which provides supplementary PE lessons at 14 nursery schools and 16 primary schools in Bremen.

These are schools where there are not PE teachers or no provision for sports activities yet Werder’s presence offers their pupils the opportunity to participate in sport and exercise as well as to learn important social values.

So many other children benefit too from Werder’s efforts, which, since 2015, have also included an annual inclusion day (sponsored by the DFL Foundation and Aktion Mensch), offering sports activities for visually impaired children and teenagers.

In their own words: ‘Sport can open doors’

“At Werder Bremen, we are convinced that sport can open doors and create new opportunities for young people with disabilities or from minority groups in ways that would not otherwise be possible,” explains Henrik Oesau, Werder Bremen CSR project manager. “Sport can be the means [for doing that]. That is why we work on this project with such passion.

“We dedicate our work to specific target groups – children with disabilities or from minority groups and child refugees.

“The pandemic has forced us to be creative, to stay in touch with our groups to show that they are still part of a team, so they can feel the trust and support of that team.

“We will continue our work and try to use the power of football and Werder Bremen’s logo to make a positive difference to our society.”

Former Werder player and coach, Thomas Schaaf, who is now the club’s technical director, believes it has a responsibility to the local community.

“As a big football club, we need to understand that we receive so much, that the fans put their trust in us, everyone involved makes a huge effort to be part of it,” he explains. “We benefit from this commitment. I believe it’s important that we give commitment back.”

Shakhtar Social is a non-profit foundation established by FC Shakhtar Donetsk in 2018 to implement the club’s social and charitable projects, as well as to develop children’s grassroots football in Ukraine. Shakhtar Social runs the ‘Come On, Let’s Play!’ project aimed at promoting children’s football and allows disabled children – boys and girls, aged from seven to 16 – to participate in free football sessions in six Ukrainian cities. Participants include youngsters with autism, cerebral palsy, Down syndrome and hearing impairments, and the project helped Shakhtar Social win the UN Partnership for Sustainability Award in December 2019.

The Dundee United Community Trust (DUCT) has developed an education programme in partnership with local primary schools which benefits over 300 children. Titled ‘Shoot Back in Time’, the project uses the environment of a football club to engage pupils in numeracy, literacy and communication skills. The DUCT currently runs a mental health football team and plans to launch an amputee football activity across the city as well as weekly sessions for physically disabled children. It set up Dundee United Women’s FC in 2017 to involve more local women in football and the team have already won a league cup, two league titles and promotion to the second tier of the Scottish Women’s Premier League (SWPL 2). 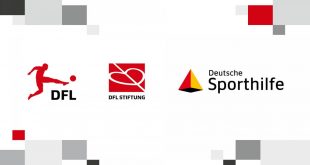