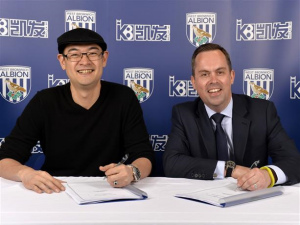 Earlier this week English Premier League side West Bromwich Albion announced UK-K8.com (凯发娱乐) as the Club’s new shirt sponsor from the 2016/17 season onwards. The agreement with the online casino operator will be for an initial two-year period in a record commercial deal for the club.

The partnership enables K8 Group to launch their European brand UK-K8.com in the United Kingdom, working with the Baggies to reach and engage with new customers of their product.

Albion will also work with the K8 group in the Asian market, where their K8.com brand is particularly strong.

The partnership provides a strategic opportunity for Albion to increase their following and engage with fans in new markets overseas.

UK-K8.com will also work with the Club in developing video content – a partnership which promises to engage sponsors and supporters.

On the new partnership, Vincent Huang, COO of K8 Group, said: “K8 Group has had a long standing interest in working with a Premier League club and finally we are here with one of the most respected clubs in the Premier League.”

The Premier League’s standing in Chinese football and its media has grown as a result of the new broadcasting deal signed with CCTV, the most viewed free to air television station in that region.

Vincent added: “This partnership is delivered as a true partnership for both parties. We are working on a joint marketing plan that will focus on raising awareness of UK-K8.com in the UK whilst also ensuring the development of the West Bromwich Albion brand in Asia.”

“We will be working with the Club on several key projects to create a platform for the Club to grow awareness and engagement in this region.”

“In keeping with various government strategies in the Asian region, we will also be working with the Club on coaching exchanges and other football related initiatives, hopefully replicating some elements of the highly successful Pass It Forward project in India.”

“And, of course, Albion fans across the world can look forward to some exciting opportunities to better connect with the Baggies through UK-K8.com.”

Speaking of the record agreement, Adrian Wright, Sales and Marketing Director for the Albion added: “We welcome K8 Group to our well established partnership programme.”

“Once again we have selected to work alongside a challenger brand that will align with the club’s on-going aspirations for global brand recognition.”

“It was clear from our talks that the joint promotional approach in Asia will add immense amount of value to the Club and will enable us to continue to grow our supporter bases in emerging parts of the world.”