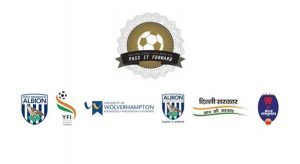 The Baggies defender and Sweden international was at the centre of a five-day promotional visit to India to witness first-hand the Club’s ‘Pass it Forward’ project launched with partners University of Wolverhampton, The Albion Foundation, Delhi Dynamos, The Delhi State Government and Youth Football International (YFI).

Olsson took a week out of his summer break to see for himself the Club’s Pass It Forward programme at work and coach some of the poorest children in New Delhi.

Olsson and Albion Foundation Director Rob Lake joined coaches from The University of Wolverhampton, the clubs partner in the initiative who have been in New Delhi for six weeks to conduct a number of training sessions with disadvantaged youngsters in the city’s slums.

Speaking about his experiences, Olsson after his return to Europe told the Express and Star newspaper, “The children we visited have very little. Their shoes, if they have them, are well worn.”

“They live difficult lives and face a number of challenges every day. Where their next meal is coming from is not always clear.”

“I spent a couple of hours with them and they seemed to really enjoy my visit – but I think it will have a greater long-term impact on me. It was humbling to be in their company. Football seemed trivial in their circumstances,” added Olsson.

“They live on streets with open sewers, little access to clean water, and an alarming shortage of toilets. They have no healthcare insurance and live in an area where the most common job is rag picking,” Olsson continued.

“So to be there to play football with the children was a little odd,” Olsson concluded.

Albion director Adrian Wright, who started the Pass It Forward initiative three years ago, has been equally thrilled to note Jonas’ contribution.

“The impact of having one of our current players go to see for himself what the project is all about is immeasurable,” said Wright. “But the fact that Jonas has been so genuine and enthusiastic about it all takes it even greater levels.

“It’s very easy to see today’s players getting a bad press – I hope the critics also remember this effort from Jonas which we repeat was entirely of his own making.”