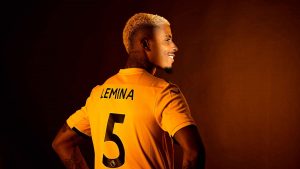 The 29-year-old, who has experienced Premier League football previously with Southampton FC and Fulham FC and appeared in a UEFA Champions League final, has agreed a two-and-a-half-year deal at Molineux.

The transfer includes a further 12-month option and comes after Lemina spent the first half of the campaign playing regularly for Ligue 1 side OGC Nice, featuring as recently as Wednesday in a 6-1 win over Montpellier.

A powerful, dynamic midfielder who has also been utilised out wide and in defence during his career, such is his versatility, began his senior career in France with Lorient, before quickly being picked up by Marcelo Bielsa at Olympique Marseille.

UEFA Champions League football followed in the south of France, and it was that form for Marseille which propelled the midfielder’s career, as he headed to Juventus FC, which led to his first taste of major silverware in football.

Juventus won the Serie A title in both of Lemina’s seasons in Italy, while in Europe, the midfielder featured in the quarterfinal, semifinal and final of a thrilling 2017 UEFA Champions League journey, which was ended by Real Madrid in the Millennium Stadium showdown.

That 2016/17 campaign also brought about an appearance at the Africa Cup of Nations for Lemina, who has earned 24 caps for Gabon, scoring three goals, but this time last year he called time on his international career, aiming to focus on club football.

That career has brought about 74 appearances in the Premier League, primarily on the south coast, after Lemina switched Juventus for Southampton in 2017 and opened his scoring account in English football in a win at West Bromwich Albion.

While on Saints’ books, the 29-year-old also sampled Turkey with Galatasaray, before broadening his Premier League experience with Fulham, both on loan, before a permanent switch to Nice came in July 2021 followed.

During the 18 months prior to Lemina’s Molineux move, he appeared in the Coupe de France final and impressed in the heart of the Nice midfield, which attracted the interest of Lopetegui and Wolves, who moved to bolster their midfield options.