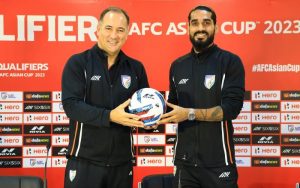 As the ‘City of Joy’ gears up to host the Blue Tigers in their first match of the 2023 AFC Asian Cup Qualifiers Group D matches at the Saltlake Stadium in Kolkata, India head coach Igor Stimac averred that the “passion from the stands will add to the extra strength in the legs, and hearts of the players”.

Speaking at the official pre-match press conference, Stimac stated: “We are expecting the fans to come in numbers, to support the national team in the best way possible. Our intent is to press from the start, play at high pressure, and at a high intensity. We need to control the game, and I have to say we are ready for that. We have nothing to hide.”

Star defender Sandesh Jhingan felt, “qualifying for the Asian Cup should be a norm for Indian football. The mentality needs to be that India will be at the Asian Cup.”

“I joined the team a bit late. But when I came in, I could gauge the improvement in the squad. The improvement among players individually was there to see. We are motivated. We know the potential of this batch, and we need to start delivering,” he maintained.

India begin their campaign against Cambodia at the Saltlake Stadium on Wednesday, June 8 at 8.30pm, and the match will be telecast live on the Star Sports Network.

“For me as a coach, it is not important who scores. But it’s important that we score. We need to accept that our recent oppositions – Bahrain, Belarus, and Jordan – were technically better than us. But we had our chances, and failed to capitalise on them,” Igor quipped. “We have young players who are feeling the pressure of being in the National team. We need to push these young players earlier in their career, and need to be patient.”

Referring to a query about the Blue Tigers conceding late goals, the coach informed: “I’m not worried as we are now ready to battle it out for 90 minutes. There is more strength in our legs and more oxygen in our brains. We have been training to our strengths, and it has helped us a lot.”

Sandesh hinted that maintaining a clean sheet is paramount for the boys. “Clean sheet is a simple concept for any team. Every team that goes into a match carries that mentality with them. There’s no concept in modern football that only defenders will defend. The team needs to be in sync. The striker is the first defender, while the goalkeeper is the first attacker,” Jhingan pronounced.

“Once we started together as a team, we were clear what we wanted to do in the future. The first step is for India to participate in the final of the Asian Cup. You always need to go through these stages. We are the favourites in this group and are in a good position. We need to get into the finals, and do better than the last time we were in the tournament,” Stimac, who coached Croatia to qualify for the FIFA World Cup Brazil 2014, expressed.

At the same time, however, the coach sounded a cautious note. “I respect every opponent. There is no reason to underestimate Cambodia. They have come here with the same desire. We need to be hungry for this game, and we are. But today’s football doesn’t bring in any easy games.”

With so much competition for places in the squad, Sandesh stressed that “no player has a permanent place in the squad.”

“The competition for each spot is very high, and so is the quality. We have at least 2 players fighting for each spot. I think both Pritam Kotal and Rahul Bheke are top players, and Anwar Ali has a big personality too. I have massive respect for him.”

Meanwhile, Cambodia coach Hirose Ryu mentioned that their team is “motivated to play away from home.”

“It does not matter where we are playing, and we will be giving our best,” Ryu mentioned. Player Soeuy Visal complimented it, saying they are “confident, and despite India being a higher-ranked opponent, we have immense trust in their abilities.”