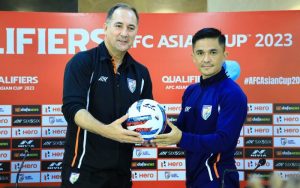 Headaches! They are irritating, aren’t they? But for National Team Head Coach Igor Stimac, they are “pleasant, and wonderful.”

“We will train and then decide who is to be rested and who will start against Hong Kong. But whom do you pick and who do you leave out?” Stimac referred to having Kotal, Bose, Thapa, Sahal, and Yasir amongst others waiting for their chance on the bench. “This is my main worry, and I love this worry. I love this kind of headache you know – it’s a pleasant one, a wonderful one.” He was speaking at the official pre-match official press conference.

India play Hong Kong in their last match of the Group D Asian Cup qualifiers at the VYBK on Tuesday (June 14, 2022), the kick-off of which is at 8.30 pm. The match is to be telecast live on Star Sports network, and the live streaming will be available one Disney+ Hotstar and Jio TV. Afghanistan play Cambodia in the other match of the day at 5 pm IST.

“Obviously there is less pressure on us to win this game but the hunger and motivation remain the same. We need to go out and start playing the way we did against Afghanistan to win this game,” said Stimac.

As things in the group stand, both India and Hong Kong are on 6 points each from 2 matches, with Hong Kong enjoying a superior goal difference of +4 in comparison to India’s +3. The 6 group winners, along with the best five 2nd best-placed teams earning a ticket to the AFC Asian Cup 2023.

“There is a big prize at the end which is qualification to the Asian Cup. Even though we have done good in the last two games, we have not achieved anything yet. What we have learnt is to keep everything aside. We just have to focus on the next game, and end the tournament on a positive note,” captain Sunil Chhetri, also present at the press conference, maintained.

Stimac stressed “it’s all about the fitness level and physical condition of each player.”

“We need to compliment Hong Kong for what they have shown in the first two games and credit to them for scoring more than us against Cambodia in their clash,” the coach stated.

Captain Sunil Chhetri averred: “I think we just need to pick up from where we left, because at the start of the tournament, the coach had made sure that we played the tournament to win.”

Sunil, currently on 83 international goals, made a mention of the young guns in the team, who are coming out with flying colours. “I’m telling you good things are going to happen with this team. Slowly and steadily, they are understanding what they have to do. The likes of Akash, Jeakson, Suresh, Anwar – just imagine what they will be able to do once they get 10-20 caps under their belt.”

Stimac reminded, “the boys he mentioned are perfect for the system. I want everyone to appreciate them more. Since AIFF made sure to bring the World Cup, and Indian Arrows, there have been so many good players who have come through.”