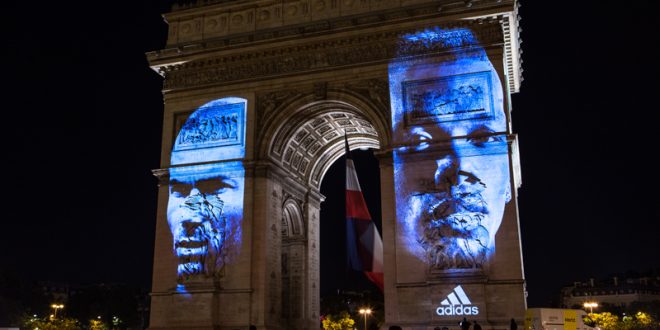 Zinedine Zidane inspires a new France generation ahead of the EURO 2016 Final!

Arunava Chaudhuri 2016-07-10 Europe, France Comments Off on Zinedine Zidane inspires a new France generation ahead of the EURO 2016 Final! 1,926 Views 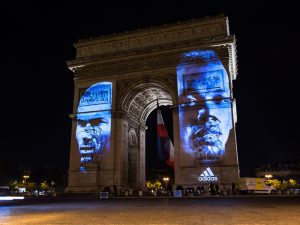 As the UEFA EURO 2016 moves into the Final, adidas today unveiled a “First Never Follows” projection on to the façade of the famous Arc de Triomphe monument in the centre of Paris, featuring legendary France midfielder Zinédine Zidane and rising star Paul Pogba.

The projection onto one of the world’s most recognisable landmarks shows the face of Zidane with the accompanying words: “Écrire Sa Propre Histoire” meaning “Write Your Own History”.

The projection then shows the faces of Zinédine Zidane and Paul Pogba together, before the message ends with the face of Pogba and the line “First Never Follows”.

Zinédine Zidane is widely considered to be one of the greatest players of all time, winning the FIFA World Player of the Year Award on three separate occasions; in addition to the 1998 FIFA World Cup and 2000 UEFA European Championships with his country. Now, it’s time for the next generation of players including Pogba to write their own history during tonight’s UEFA EURO 2016 Final at the Stade de France in Paris.