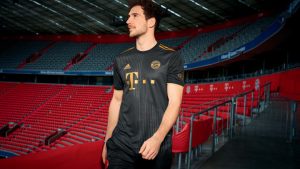 FC Bayern Munich and adidas launched the new black and golden away jersey kit for the 2021/22 season today.

The new design of the black away jersey impresses with its golden accents. Both the golden club crest and the golden lettering and numbers on the back provide an elegant contrast to the dark shirt colour.

The three stripes on the shoulder as well as the sponsors’ logos shine in the same colour scheme. Fine white dots that stretch across the chest in two areas create a subtle diamond look. Just below the round neck collar on the back, however, is the highlight of the jersey: the “Münchner Kindl”. The emblematic figure of the city of Munich depicted on the jersey symbolizes the club’s ties to the Bavarian capital and is a reminder of the roots of the German record champions.

The new away jersey will be worn by the players for the first time on the last Bundesliga matchday against FC Augsburg on Saturday, May 22.