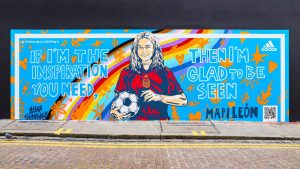 adidas has revealed four murals celebrating stars of UEFA Women’s EURO 2022 ahead of the biggest European women’s sport event in history kicks off.

Created in collaboration with female artists from the UK and revealed in four London locations, the murals celebrate the personal goals and achievements of Mapi Leon, Millie Bright, Vivianne Miedema and Wendie Renard. Each mural features a design that visualises the player’s story, framed by their goals.

The murals are part of adidas’s campaign for UEFA Women’s EURO 2022, which celebrates the incredible players taking part, with the aim of inspiring young football fans to pursue their own goals. The goal frame design represents the goals that the players have achieved in their lives so far, and the goals they continue to pursue – from world-firsts in football, to working with young people. Each of the murals also features a QR code that links to a short film charting the player’s journey:

“Our focus for UEFA Women’s EURO 2022 is to ensure the players get the spotlight that their incredible talent deserves. We are so proud to work with a group of players who are inspiring the next generation on and off the pitch. For people who know the players well already, the murals will be a source of great pride, and for those new to the game, we hope this will be an inspiring introduction to some of the modern stars of the game” said Claus-Peter Mayer – SVP Brand, adidas Europe.

Speaking about her mural, Spain player Mapi Leon said: “I have loved being part of this campaign. I think it’s a great way to show another side of players outside of football and to be able to help inspire anyone who identifies with me or any of the other players involved. The mural is amazing. I really love art, so putting it on the street where everyone who passes by can see it is overwhelming. It’s all incredible!”

For the UEFA Foundation for Children, the UEFA Super Cup is much more than the …