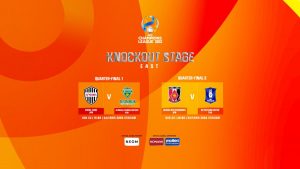 The four AFC Champions League 2022 (East) quarterfinalists learnt their path to the final following the conclusion of the knockout stage draw on Saturday.

The draw, conducted at the Saitama Stadium 2002, saw Japan’s Vissel Kobe drawn to meet Jeonbuk Hyundai Motors of South Korea while Urawa Red Diamonds, also from Japan, will meet BG Pathum United of Thailand with the quarterfinals to be played on Monday.

Vissel Kobe head coach Takayuki Yoshida said his side, who shrugged off their domestic troubles to stun Yokohama F. Marinos 3-2 in their Round of 16 showdown on Thursday, are determined to prolong their involvement in the competition, having qualified for the semifinals in their AFC Champions League debut in 2020.

“No matter who we face, what we do and how we approach the game is going to be the same but we’ll be playing a fantastic team from Korea and we’re looking forward to that match,” said Yoshida.

Jeonbuk Hyundai Motors head coach Kim Sang-sik also said it didn’t matter who his side play as all the teams are equally matched.

“We’re focused on recovering the players mentally and physically and then we’re going to prepare for a good match with Vissel Kobe on Monday. There is a rivalry with Japan, so we’re going to try our best to get the win,” said Kim.

Champions in 2006 and 2016, Jeonbuk had to do it the hard way against Daegu FC in the Round of 16 with substitute Kim Jin-gyu’s late goal in extra-time securing them a 2-1 win over their South Korea rivals.

BG Pathum United head coach Makoto Teguramori said his players would be thrilled with the draw.

“It’s a very satisfying draw for us. We are facing the host club, Urawa Red Diamonds, and it’s an honour for us to play against them. It’s a good competition for us to see how well we have developed as a team and how we can compete against one of the best teams in Asia,” said Teguramori, whose side advanced to their first AFC Champions League quarter-final with an emphatic 4-0 win over Hong Kong’s Kitchee SC.

Urawa Red Diamonds, champions in 2007 and 2017, were in a class of their own as they stormed 5-0 past Malaysia’s Johor Darul Ta’zim in the Round of 16 and head coach Ricardo Rodriguez said his players would be at their best on Monday.

“Every team has shown something to be here in this moment, so any club is going to be difficult. I was coach of Bangkok Glass (as BG Pathum United were previously known) a few years ago so I have good memories, it will be a very special game for me,” said Rodriguez.