AIFF ExCo member Tababi Devi: Must fight every step of the way to climb FIFA Rankings! 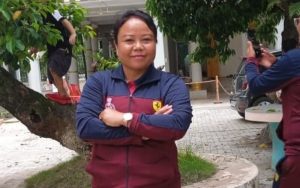 A new era has been ushered into Indian Football. One where former players – those that were eminent on the stomping grounds back in their heydays, now have a say in the administrative affairs of the game in the country. One such name is former India International Tababi Devi – an eminent player, who represented the Blue Tigresses up until 2011 with distinction.

Having been co-opted into the AIFF’s Executive Committee earlier this month, Tababi Devi will be a part of Indian football’s highest decision-making body for the next four years.

“We now have two former women footballers in the Executive Committee, and it is a great honour and opportunity for us to represent the women’s football community at the top administrative level,” said Tababi Devi. “This new refreshing change now means that the we get a direct voice at the administrative level, and I am sure that we can now begin to take better steps towards improving women’s football in India.”

One of the key objectives for the former India captain is to help the National Teams climb the FIFA Rankings.

“We need to go up the rankings, and we need to fight together every step of the way, to climb higher,” said Tababi. “The main aim is to take measures, because of which more quality players will keep coming through.”

While there is always great room for improvement, the former Blue Tigresses skipper believes that women’s football in India has already come a long way from her playing days.

“I think there has been much improvement recently. A lot of tournaments do take place now, and our girls get to play more frequently than what we used to. We have seen the effects of that, and so many good players are coming through the ranks now,” she said.

However, Tababi believes that a strong grassroots programme is required to help women’s football further grow.

“I am from Manipur, and one thing I’ve seen so far is that so many quality players come through in women’s football from our state. There is only one reason for that. There is a strong base at the grassroots level in Manipur,” Tababi quipped. “If we can implement similar models across other states as well, we will naturally see the level of women’s football increase exponentially in the coming years.”

With the FIFA U-17 Women’s World Cup set to be held in India next month, Tababi is looking forward to the ripple effect a tournament of that stature could have on the women’s game in the country.

“These are exciting times. The World Cup is coming up next month, and that would give the parents all across the nation the opportunity to see what their daughters could potentially do, if they are allowed to play football from a young age,” she said. “I hope this helps inspire all the aspiring little girls out there too.”

Tababi Devi, a regular with the National Team during her playing days, had represented the Senior Women’s Team in prestigious tournaments like the Asian Games, 2011 South Asian Games, and many more important meets.