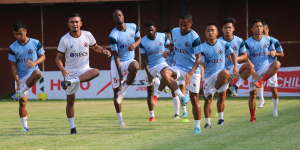 Aizawl FC will take on NEROCA FC in the sixth-round fixture of the I-League 2022-23 at the Rajiv Gandhi Stadium in Aizawl, Mizoram on Thursday, December 8.

Aizawl FC earned just a single point in their last two games. They salvaged a draw against Churchill Brothers after Henry Kisekka scored the equaliser in the final quarter of the game. The People’s Club will look to repeat their valiant efforts from their previous home win against Sudeva Delhi FC as they take the field again in front of home fans. Meanwhile, NEROCA FC will focus on bouncing back from their fifth-round loss against Rajasthan United FC.

The two have faced each other on seven occasions with both Aizawl FC and NEROCA FC winning two games each. However, Aizawl enjoy a streak of consecutive victories, winning 2-1 and 2-0 in the last two meetings.

At the pre-match press conference, the Aizawl FC assistant coach Victor Lalbiakmawia spoke about his team’s previous outing. He said, “We started the first half badly. For the first 45 minutes, we were chasing the game. After the changes during halftime, I think we controlled the game, created chances and in the end, we could have won it. So, after evaluating our performance in the last match, I think the most important thing will be how well we start the game tomorrow.”

Lalbiakmawia then talked about the opponents and his intent for tomorrow’s game. “NEROCA are a young and good team. They have been in the I-League for many years now. Whoever puts in more effort and starts the game positively will win the match. We will approach the game aiming for three points tomorrow,” he said.

K Lalrinfela, more known as Mafela, scored the important goal against TRAU in round one, securing a point for his team. The forward has had a decent start to the season but feels he can do better. “I think right now I have to put more effort as I can display quality football on the field,” Mafela said. 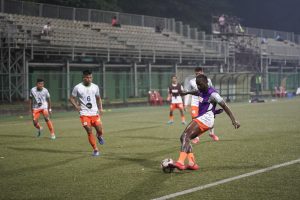 NEROCA FC head coach Khogen Singh said, “Aizawl FC are a very good side. We are a new team and follow a different approach to the away matches. We are looking for three points and tomorrow, it will be an exciting game.”

According to the head coach, his squad is inexperienced, which is the reason why they are not being able to score too many goals. “In every game we are trying to fight and create chances. We have a group of young players who lack experience. Match by match they are improving and soon they will start scoring goals.” Khogen said.

Goalkeeper Soram Poirei, who started the first three games for the club and helped keep a crucial clean sheet against Sudeva Delhi FC, pondered on the challenges faced by the dressing room. “Most of us belong to different regions and cultures. Initially, the communication was difficult but now everyone is starting to understand each other, we have a better bond now,” he said.

The match between Aizawl FC and NEROCA FC will kick off at 2pm IST and will be broadcast live on Eurosport and Doordarshan Sports and streamed live on the Discovery Plus OTT platform.