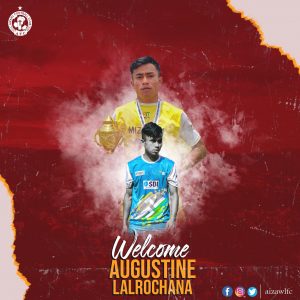 18 year old Vairengte-born Augustine Lalrochana is a former Aizawl FC Academy player, who has also played for the Chhinga Veng FC Under-18 and Bethlehem Vengthlang FC.

Augustine Lalrochana was one of the key players of Mizoram state team that won the Gold Medal in the recently concluded Khelo India Youth Games.