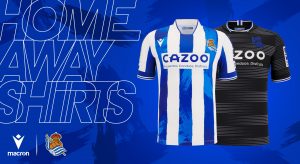 Real Sociedad, a constant presence at the top of the Spanish LaLiga, and Macron, historic technical partner to the Basque club, have revealed the new “Home” and “Away” kits that the Txuri-urdin will wear for next season’s matches. The kits feature a combination of tradition and stylistic innovation with striking graphic effects.

The new “Home” shirt has a knitted Mandarin neck and is inspired by the look of the ’90s. It features the club’s classic vertical white and blue stripes formed by repeated “brush strokes”. Inside the “brushed on” blue stripes is a graphic motif formed by other brush strokes in three different shades of blue. The result is a sort of camouflage look that adds depth to the shirt and gives it a distinctly artistic appearance. The stripes are repeated at the bottom of the back as well, while the pattern of brush strokes in different shades of blue predominates at the top. The backneck is customised with the logo of Real Sociedad and the words “REALAREN BIHOTZA” (the Heart of Real) against a background that repeats the graphics of the shirt. On the back, under the neck is a silicone print of the Ikurrina, the Basque flag. The shirt’s right chest is decorated with the Macron Hero logo while the left bears the embossed badge of Real Sociedad, with a tone on tone version underneath. The shorts are white with stripes at the sides that repeat the brushed blue motif of the shirt. The socks are white with a blue cuff at the top and a series of horizontal stripes in different shades of blue in the middle. The socks are decorated with the Macron Hero logo at ankle height and the letters “RS” on the calf.

The “Away” kit is in total black and has a Mandarin neck with blue and white trim. The sleeve cuffs and side slits are trimmed in the same way. As with the Home shirt, the backneck is customised with a blue brush-stroke background and the words “REALAREN BIHOTZA”. A silicone printed Ikurrina appears on the back at neck height. This shirt is characterised graphically by tone on tone, optical effect, broken horizontal stripes that cover the front and the sleeves. The Macron Hero appears on the right and the Real Sociedad badge on the left of the chest, both silicone printed in blue. The kit is completed by black shorts and black socks with two horizontal blue and white stripes at the top.

The shirts are Slim Fit and made mainly from Softlock with micromesh inserts for light weight and excellent breathability.