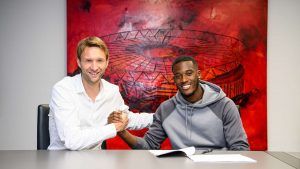 Bayer 04 Leverkusen have reacted to the long-term injuries to offensive players Karim Bellarabi and Amine Adli by signing Callum Hudson-Odoi from Chelsea FC. The England international has signed on a 12-month loan deal from the Premier League. Hudson-Odoi has three full international caps for England, he came through the youth set-up at last year’s UEFA Champions League winners Chelsea FC and is under contract at the Blues to 2024.

“We have signed a fast and penetrative winger in Callum Hudson-Odoi. He has everything to be able to help us immediately,” said sporting managing director Simon Rolfes about the 21-year-old who will wear the number 17 shirt at the Werkself. “Callum has played over 100 games for Chelsea and proven himself in the Premier League as well as in the UEFA Champions League. This will give our attacking game another special component. We’re very happy this transfer has gone through.”

The versatile Hudson-Odoi can play on either wing as well as in attacking midfield. “The move to Germany is really exciting for me and I can play in the UEFA Champions League with Bayer 04 Leverkusen,” said the 1.77 metre right footer in explaining his transfer. “That combination is really attractive and I’m keen to get to know the club, the fans and the Bundesliga. Kai Havertz only had good things to say about it to me in the Chelsea dressing room.”