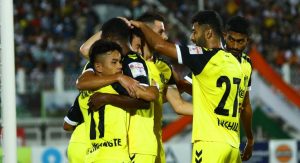 Hyderabad FC continued their impressive run in the 131st edition of the Durand Cup as they beat NEROCA FC 3-0 in another exciting contest at the Khuman Lampak Stadium in Imphal on Tuesday.

Joel Chianese (2′) and Bart Ogbeche (17′,82′) were on target for Hyderabad FC as they registered their third consecutive victory in Group C of the competition to stand at the top of the table with nine points so far.

This win also confirms Hyderabad FC’s qualification into the quarterfinals of the competition, scheduled to kick off in Kolkata in September.

In spite of ringing in the changes again, Manolo Marquez’s men started off on the right foot, scoring just two minutes into the game. It was Chianese who converted from close range at the end of a scrap inside the NEROCA box.

But it was just the start for Hyderabad FC, who constantly piled the pressure on and found a second through Bart Ogbeche before the 20th-minute mark.

Ogbeche was there to complete off a well-worked move from the left as Lalchungnunga Chhangte and Borja Herrera combined well to create the chance.

All the while, the Hyderabad FC backline kept its shape and managed to see out any danger thrown at them before Ogbeche found another late in the game.

This time it was a low pull-back from Hitesh Sharma, and Ogbeche was there at the edge of the box to find the bottom right corner.

Akash Mishra, Chhangte and Nikhil Poojary created plenty of chances while the backline of Odei Onaindia and Nim Dorjee Tamang made sure that Laxmikant Kattimani did not have too many saves to make.

This is Hyderabad FC’s second clean sheet of the competition and with three wins in three, they are now through to the next round, with a game in hand in Group C.

Manolo Marquez’s men are back in action when they take on Army Red FT at the Khuman Lampak Stadium on Saturday, September 3.