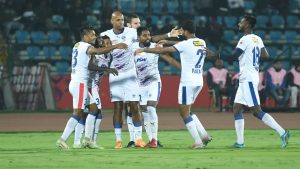 Alan Costa scored yet another late winner (90+4′) as Bengaluru FC got the New Year off to the perfect start beating NorthEast United FC 2-1 at the Indira Gandhi Athletic Stadium, in Guwahati, on Friday. Sivasakthi Narayanan’s first Indian Super League goal (50′) gave Bengaluru FC the lead, only to see it wiped away by a Romain Philippoteaux finish (66′) from a freekick. But just when it looked like yet another frustrating night for Simon Grayson’s men, the Blues’ Brazilian centre-half rose and nodded home a deft cross from Udanta Singh to take all points back to the garden city.

There were more than just a few changes to the team that Grayson rolled out after last week’s defeat in Kolkata. Rohit Kumar started his first League game this season, while Sivasakthi Narayanan got the nod ahead of Sunil Chhetri in attack. Alan Costa found a place alongside Aleksandar Jovanovic in a back-three, with Sandesh Jhingan starting on the bench.

A half that looked like drawing to an end with not much to write about, came alive when a Bengaluru counter saw Roy Krishna pick Sivasakthi with an inch-perfect pass. The young striker’s attempt at goal, saw the ball come off an onrushing Mirshad Michu’s face, leaving Grayson and his men with nothing to take back to the changing room.

It would, however, take only five minutes into the restart for Sivasakthi to find the back of the net, and it was a finish of the highest order. Picking a lay-off from Parag Shrivas, the striker took a touch and followed it up with a quick hit that sailed beyond an airborne Michu, and into the top corner to give Bengaluru the lead.

The goal gave Bengaluru FC the impetus, as the visitors moved the ball around the NorthEast box dangerously and at will. Instead, it was NorthEast who clawed back into the game with a goal of their own, with Romain Philippoteaux tucking a low free-kick beyond Gurpreet Singh Sandhu to make it 1-1 in the 66th minute.

Grayson replaced the goalscorer with Udanta Singh, and soon after, brought on Sunil Chhetri. The substitution looked to have got the job done when Chhetri dived low to meet Prabir Das’ cross with a firm header, only for Michu to pull off a save from point-blank range.

But just when it looked like Bengaluru’s woeful run of results would carry on into the New Year, an unmarked Costa rose high and nodded Udanta’s cross beyond Michu with a little less than two minutes to the end of the game.

The win moved Bengaluru FC to 13 points and up to eighth position on the points table. The Blues next host Odisha FC at the Kanteerava on Saturday, January 14.