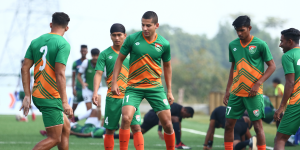 League leaders Sreenidi Deccan FC host Mumbai Kenkre FC in their first I-League 2022-23 fixture after the break at the Deccan Arena in Hyderabad on Saturday, January 7. The match will kick off at 2pm IST.

Sreenidi Deccan went into the winter break holding a two-point lead and will look to extend the gap when they take on Mumbai Kenkre FC. Both teams have come into this fixture having won their last game, prior to the break. The Deccan Warriors beat NEROCA away from home by a solitary goal, while Kenkre FC picked up a thrilling comeback win against Real Kashmir FC (2-1) at Cooperage stadium.

Undefeated at home, Sreenidi start favourites, having also won their only previous encounter against the Mumbai side. Kenkre FC for their part will hope to kick off the second half of the season in the same way they began the first — with points away from home.

At the pre-match press conference, Sreenidi Deccan assistant coach Birendra Thapa commended the decision to allow a winter break while stressing on the need to continue their pre-break form. “The two-week break was much-needed. Everybody is looking sharp. We are unbeaten at home, having won three and drawing one. We will strive to keep this winning momentum going,” Thapa said.

Thapa praised Kenkre FC’s recent performances, highlighting in particular their win against Real Kashmir. “Kenkre FC is a really good side. If you look at their last five games, they have lost only once despite playing some big teams,” he said.

Sreenidi Deccan’s versatile midfielder Sriram Boopathi highlighted a familial atmosphere inside the dressing room as key to their success. “The players are working together, and we understand each other, like a family,” he said. Boopati, played a crucial role for Chennai City FC, when the club won the Hero I-League in 2018-19 and hopes to bring that experience to his current team.

“When I won the league with Chennai City, we took it one game at a time and the same thing is happening here. Our focus is on the next game, and then we will look at the next one,” he said. 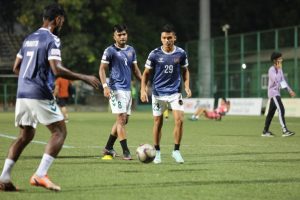 Mumbai Kenkre FC, for their part, are already better placed this season than they were at this stage last year. Reflecting on the season so far, coach Akhil Kothari was cautious in his praise and optimistic about doing things better.

“We have done reasonably well, keeping in mind the time we had to conduct our pre-season. There have been certain areas where we could have been better and the break has allowed us to work on that.”

Kothari also expressed confidence that his team would be up for the challenge against the league leaders. “Sreenidi are currently top of the table but we are focused on our plans. We will be competitive and try to get a positive result,” he said.

The match between Sreenidi Deccan FC and Mumbai Kenkre FC will be broadcast live on Eurosport and Doordarshan Sports and streamed live on the Discovery Plus OTT platform.