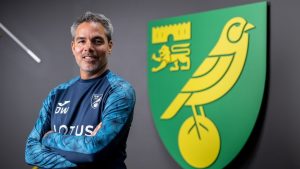 Norwich City have announced the appointment of David Wagner as the club’s new head coach.

The 51-year-old German, best known for his success with Huddersfield Town, has signed a 12-month rolling contract with the club.

Wagner will be joined at Norwich City by assistant head coach, Christoph Bühler, and Andrew Hughes, who will take up the position of first team coach.

David Wagner said, “This is a very special and proud moment for me. To be here, back in England, as the head coach of Norwich City is a huge honour.”

“I’m very pleased with what I have seen so far. The facilities at the Lotus Training Centre are top class. We now have to look forward and work extremely hard.”

“This is a new challenge for us all. Will it be easy? No. We have to leave what has happened in the past behind. If we want success, we have to be together. Together as a group of players, backroom staff and supporters.”

Sporting director Stuart Webber said, “We’re delighted that David and his staff have agreed to join the club.”

“After speaking with David, who is someone I’ve known for a long time, he quickly became the outstanding candidate. His knowledge of our squad, vision, idea around football and working style is something that clearly aligns with our short, medium and long-term goals.”

“We know we need to get to work and produce some positive performances. As always, results will follow if the performances are there.”

“We’d all like to welcome David and his staff to the club, in what I’m sure will be a successful period for Norwich City.”

“We’d also like to thank the Football Association for their prompt assistance in providing the relevant Governing Body Endorsements, and to the Home Office for processing the work permits so efficiently.”

After a spell in charge of Borussia Dortmund II, Wagner arrived in England at Huddersfield Town in November 2015.

He guided Huddersfield to promotion to the Premier League via the playoffs in the 2016/17 season, before helping the Terriers retain their Premier League status the following season.

He has since held the head coach position at top flight clubs FC Schalke 04 in Germany and BSC Young Boys in Switzerland.

Prior to management, Wagner’s playing career, spent entirely in his native Germany, representing the likes of Eintracht Frankfurt, 1.FSV Mainz 05 and FC Schalke 04. He also made eight senior appearances for the United States national side.

Wagner and his backroom staff will now begin work at the Lotus Training Centre ahead of the weekend’s Emirates FA Cup tie against Blackburn Rovers at Carrow Road.