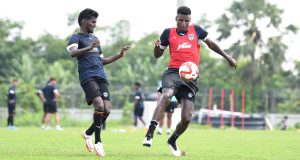 Bengaluru FC on Tuesday take on FC Goa at the Saltlake Stadium in their third Group A encounter of the Durand Cup, needing just a point to qualify for the knockout rounds of the tournament, in Kolkata. The Blues, who have started strong under Head Coach Simon Grayson with wins over Jamshedpur FC (2-1) and Indian Air Force FT (4-0) will look to build momentum as their preparations for the 2022-23 Indian Super League campaign continue.

“I’m pleased with the way the boys have been performing, they’ve worked hard in training and in the games, but there’s always room to improve. It’s all about getting players up to match speed as quickly as possible and coming through with as few injuries as possible. We have to respect FC Goa as a team, and I am sure that they will give us a good fight,” said Grayson, ahead of the encounter.

Roy Krishna and Sunil Chhetri scored in both encounters for the Blues, while youngsters Faisal Ali and Sivasakthi Narayanan were also on the scoresheet against IAF on Tuesday. “It’s a great experience for the younger boys, and I’m really happy to see some of them get on the pitch and score as well. I’ve said to everybody on the squad that, on the day, anyone can be on the team. I want them to push each other and be ready for that opportunity,” Grayson added.

Bengaluru FC are buoyed by the return of full-back Naorem Roshan Singh, who joined the squad following an illness that kept him out of the Blues’ pre-season camp in Bellary. Grayson also offered an update on the fitness of his players ahead of Tuesday’s encounter.

“Over the last ten days or so, we’ve been without Javi (Hernandez), Jayesh (Rane) and Leon (Augustine), who missed the last game, through injuries. Roshan has been unavailable over a number of weeks because of his illness. I’m glad to have them back and these boys will be in and around the team over the coming days. If they aren’t getting minutes in the game against FC Goa, it could be later against Mohammedan Sporting,” added Grayson.

FC Goa, who have turned up with a developmental squad coached by Deggie Cardozo, began their campaign with a 3-1 defeat to Mohammedan SC, followed by a 1-0 win against IAF. Their most recent encounter saw them go down 1-0 to Jamshedpur FC at the VYBK.

Kick-off between the Blues and FC Goa is scheduled for 3pm at the Saltlake Stadium and will be telecast live on the Sports18 network, with live streaming on VOOT Select and Jio TV.