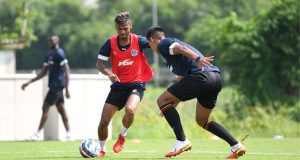 Bengaluru FC winger Faisal Ali has returned on loan to I-League Mohammedan Sporting Club for the remainder of the 2022/23 season.

At senior level, Faisal Ali showed himself at Bhowanipore FC which prompted Mohammedan Sporting to sign him and he impressed for the Black Panthers in his time at the club.

That led to Bengaluru FC signing him last summer and Faisal Ali was part of their Durand Cup winning campaign, scoring also a goal in the process but he thereafter did not feature in their ISL-9 campaign, so he moves back to Mohammedan Sporting, who have been in the market for reinforcements.

Bengaluru FC stated on social media, “The club can confirm that winger Faisal Ali has joined Mohammedan Sporting on a loan deal until the end of the current season.”

UPDATE : Mohammedan Sporting Club have roped in Faisal Ali for the remainder of the season from Bengaluru FC on loan 💪🏻⚫️⚪️

UPDATE: The club can confirm that winger Faisal Ali has joined Mohammedan Sporting on a loan deal until the end of the current season. #WeAreBFC pic.twitter.com/rydfHZJ9Lj