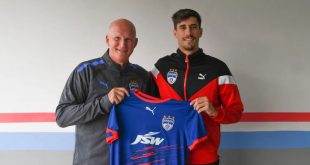 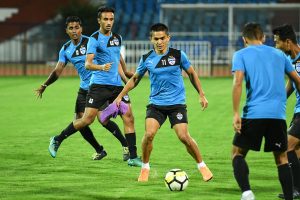 Bengaluru FC will hit the ground running when they begin life and the season under new coach Carles Cuadrat with a high-stakes AFC Cup Inter-Zone semifinal against Turkmenistan side Altyn Asyr at the Sree Kanteerava Stadium in Bengaluru on Wednesday. The Blues, who are attempting to qualify for the semifinal of the competition for a third straight time, are up against a side that knocked out last year’s finalists in FC Istiklol and are yet to lose a game in this edition.

Cuadrat, who took over the mantle from mentor Albert Roca before the start of the season, said he was confident that a gruelling pre-season in Spain would come handy for a stage and an opponent like this. “We played some very tough teams in Spain and while results didn’t go our way, I feel the experience has prepared us well for both the home and the away legs of this fixture.”

The Blues who faced off against Atletico Saguntino, Shabab Al Ahli Dubai, Villarreal CF B and FC Barcelona B in Spain, had their defence tested heavily in the second halves of the final two games. 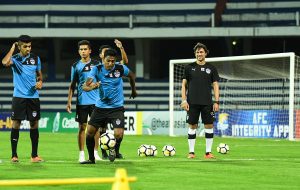 Bengaluru FC will be buoyed by the inclusion of talismanic striker Miku who has been registered for the competition in his second season with the club. The Venezuelan had a twenty-goal year playing the ISL and the Super Cup and the Blues will hope he picks up from where he left off.

The game could also mark the debut of Spanish midfielder Xisco Hernandez who joined the Blues this summer, while Rino Anto could be in the reckoning in what is his second spell with the club. Cuadrat will however be without Harmanjot Khabra who is down with chicken pox. “It’s strange that we had two cases of chicken pox, but that’s what it is. While Gurpreet has recovered, Khabra will miss this game,” Cuadrat informed. Also missing the game with minor niggles are Sairuat Kima and Robinson Singh.

The visitors on the other hand will be banking heavily on the strike duo of Altymyrat Annadurdyyev (6 goals) and Murat Yakshiyev (5 goals) who have combined for eleven of seventeen goals scored in the group stages. While there have been six more goalscorers, the pair will be the prime focus for the Bengaluru FC defence tomorrow.

It needed drama and a little luck on the last day of the league stages for Bengaluru FC to secure a spot in the knockout stages. The Blues needed to beat Abahani Dhaka Limited while hoping that fellow-contenders New Radiant SC would drop points against Aizawl FC. The script played out perfectly for the Super Cup champions as they hammered Abahani and Aizawl FC shocked New Radiant with a 2-1 win.

Equally dramatic was Altyn Asyr’s passage to the Inter-Zone semifinal as they snatched the top spot from FC Istiklol (Tajikistan) in the final moments. The Turkmenistan champions were away to Istiklol, who were two points ahead going into the final round. The Tajik-side, who got better off Bengaluru FC in last-year’s Inter-Zone final, levelled scores at 2-2 in the 90th minute only to be denied by an injury time winner from Altyn Asyr’s Mihail Titow to send them through to the knockout stage.

The game kicks off at 8pm and will be shown live on DSport.

Previous eSports: What Official Recognition could mean for eSports Teams and Football Clubs!
Next UMBRO’s Speciali 98: A boot inspired by a magical moment!