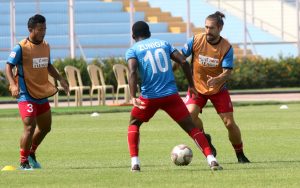 Perhaps the biggest favourites to win the I-League this season are Churchill Brothers led by Clayvin Zuniga and Luka Majcen. The Fernando Varela-coached side has been a juggernaut in this season of the I-League – undefeated so far.

However, the Red Machines will face a litmus test in the form of Real Kashmir FC when the two sides clash at the Saltlake Stadium in Kolkata on Friday, March 5.

The match will kick-off at 2pm IST and will be broadcasted on the 1Sports channel, whilst being streamed live on their Facebook page.

The Red Machines have garnered 22 points from 10 matches, while Real Kashmir follow closely behind with 17 points out of 10. A win for either side could have long-term implications on the season of both the contingents. Although their previous meeting ended in a goalless stalemate, the form that Clayvin Zuniga, Luka Majcen, Mason Robertson, and Lukman Adefemi are in, it could be goals galore come tomorrow.

Churchill Brothers managed to thwart off a late scare by Gokulam Kerala FC in their last match while trotting off to a comfortable win and Fernando Varela’s side would aim to keep the winning momentum going. Speaking at the official press conference, the head coach said, “We are aware of the counter-attacking threat that Real Kashmir possesses. We are well prepared and are looking forward to the fixture. We will be taking one game at a time and are not thinking about the future at this moment in time.”

Midfielder Quan Gomes said, “The morale of the team is very high. We are working very hard and the next match is very important for us. We are prepared for the next match and grabbing 3 points against Real Kashmir is our focus.”

However, David Robertson’s side will aim to recuperate and get back to winning ways against the Red Machines. And maybe they can pull off a miracle of their own by defeating the undefeated Churchill Brothers.

Speaking at the official press conference, head coach David Robertson said, “It is going to be a tough game tomorrow. It is the first game of the second stage and we will love to start with a win. We were a little flat last time around and we just need to get back on track.”

Defender Dharmaraj Ravanan said, “We have our focus set on the next match against Churchill. We are motivated and well prepared. The defeat in our previous match will not affect us heading into the next match.”