City of Bologna on new Bologna FC home & away kits by Macron! 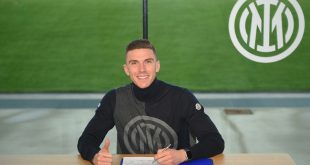 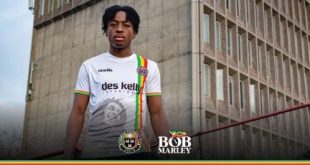 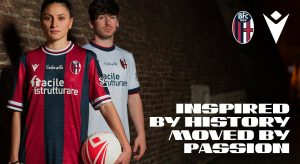 Bologna FC 1909 and Macron, time-honoured technical sponsor of the Red and Blues and international leader in the teamwear sector, present the new Home and Away kits for the 2021-22 season. A graphic detail accents the new team kits and pays homage to the city of Bologna by referencing the Two Towers and the bricks that symbolise its architecture. The jerseys also convey a message of sustainability and eco-friendliness by being made of Eco-Softlock fabric, 100% polyester made from recycled plastic and certified by the Global Recycled Standard chosen to make them. Each jersey is made by recycling 13 half-a-litre plastic bottles.

The new Home jersey sports the traditional red and blue vertical stripes. The crew neck knit jersey has white and red-blue piping that is picked up on the sleeve hems as well. The back neck is customised with the club’s colours, the motto “LO SQUADRONE CHE TREMARE IL MONDO FA” (“the great team that has the world shaking in its boots”) and the “WE ARE ONE” claim that identifies the team on and off the field. Distinguishing the 2021-2022 match kit is a special “all over” texture with an embossed pattern over the distinctive red and blue stripes that echo the bricks that characterise the city’s architecture. The Italian brand’s Macron Hero logo is printed in silicon in white on the right breast and the Bologna FC 1909 badge is on the left, close to the heart.

The Away version is white. This version of the crew neck knit jersey has a thin red stripe accent that is repeated on the sleeve hems. Like the Home kit, the back neck is personalised with the words “WE ARE ONE”. In this case, the city’s symbols are referenced by the lettering BOLOGNA FC 1909 embossed and repeated to form the stylised profile of the Two Towers. The Macron Hero logo and the club badge are positioned on the chest in blue.