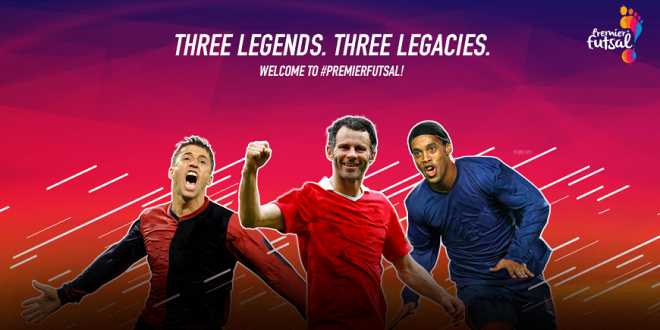 Premier Futsal, world’s first multi-national Futsal tournament will kick-start their inaugural edition at the Jawaharlal Nehru Indoor Stadium in Chennai on Friday, July 15. The first edition of the league will see six franchises divided in two groups to battle it out over eight match days and 13 matches to make it to the finals which will be played in Goa on July 24.

The unveiling of Manchester United Ambassador – Ryan Giggs, Brazilian midfield maestro Ronaldinho and the Argentine forward Hernan Crespo completed the signing of the six marquee players. Premier Futsal has previously announced Manchester United’s midfield maestro Paul Scholes and Galactico Michel Salgado as their other signings. With Portuguese international Deco having to drop out last minute because of injury, the Pele of Futsal, Falcao will replace him as the sixth marquee player for the league.

Premier Futsal also introduced all its franchise owners for the first edition today. The Mumbai franchise has been picked up by the renowned car designer Dilip Chhabria, whereas the Goa and Kochi franchises have been bought by Viiking Ventures Pvt. Ltd. and Dubai-based Yes Events Management respectively. Premier Futsal recently announced Kannada film star Puneeth Rajkumar as the owner of the Bengaluru 5’s franchise. The Kolkata franchise was bought by Bengali superstar Jeet, while Janani Ramesh of the Hindu Group, was the first to pick a team in its debut season.

Speaking at the event, Premier Futsal Co-Founder Nithyashree Subban said, “Amidst all the false allegations and attempts to tarnish the image of Premier Futsal, we are proud to kick-start our inaugural edition as scheduled on July 15 here in Chennai. It was a strategic decision to host the league in just two cities; Chennai and Goa, and with 6 franchises. We have managed to secure signatures of players who are the legends of the game and will be seen playing in India in a few days. As Premier Futsal Management, we are committed to grow Futsal here in India and we will expand the league to other cities in the future editions.”

The teams for each of the franchises were also announced today. The teams have been picked by an independent committee comprising of International Futsal experts with a view to make the teams balanced and the league competitive. For the next season, all the Futsallers will go back into the bidding pool and the owners will have to pick their team through a bidding process. The marquee players which have allotted will remain with the six franchises for the next season as well.

Premier Futsal also concluded ‘Launchpad’, a talent hunt program which was conducted in eight cities to scout for Indian Futsal players. The shortlisted Indian Futsallers were hosted a boot camp in Chennai and five players from each of the franchise markets were announced today. Each of these 5 players have been drawn in to the teams of their respective cities and will get a chance to play alongside the current best Futsal players in the world and the marquee football players.

Premier Futsal is a private and semi-professional Futsal league that will be hosted from July 15 to 26 to create awareness of futsal as a sport in India and it is is backed by Xavier Britto of the Indev Group.

The league will kick-off on July 15 and will be telecast live and exclusive on Sony SIX, SONY ESPN and Sony AATH. Matches will also be available to live stream on SonyLIV.