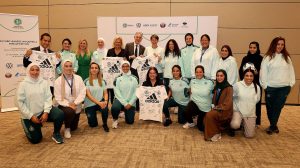 The Future Leaders in Football programme has helped inspire young women from all over the world to stimulate positive social change in their football communities.

The UEFA Assist programme has made huge strides in recent years helping countries outside Europe develop their games on the pitch – but it has also been just as effective in advancing football off it as well.

One such example is Future Leaders in Football (FLF), a German Football Association (DFB) programme backed by Assist. It focuses on the promotion of women in football and the women’s game itself with participants coming from countries all over the world. It is aimed at young people working within the sport – those that have the potential to shape the future of football as leaders within their organisations.

The DFB, together with the Deutsche Gesellschaft für Internationale Zusammenarbeit (GIZ) GmbH, designed this five-day workshop as part of “Sport for Development”, a programme held annually as a lighthouse project from EURO 2020 to EURO 2024 in Germany. The DFB is very active in the field of sustainability and social responsibility and underlines this commitment with the FLF workshop.

Under the motto ‘developing skills and taking action to tackle challenges in sport and society’, the overarching goals of these workshops is for participants to:

FLF across the world: a word from the participants

The first workshop was conducted virtually and took place in June last year at the start of EURO 2020, with 22 participants from a total of 15 countries, including Ecuador, Rwanda and Lebanon.

One of the attendees, Akanksha Chhibber from India, is now actively integrating sustainability measures into her work and daily life at the Football Association of India (AIFF). She said: “At the Future Leaders in Football I learned about sustainable development and how it can be promoted through sport and sporting events. It is a topic I didn’t know much about before and how to integrate it into my work. I believe that sport can make a big difference. Personally, it has made me more socially responsible and feel the urge to give something back to society.”

The second and third editions took place in Amman, Jordan, and Qatar ahead of this year’s World Cup, addressing social issues with the specific goal of the long-term promotion of women in the football ecosystem in the Middle East through training measures and network creation.

Fatima Zahra Benfares, Morocco, said, “It was the first time I took part in a workshop that was exclusively for women. I didn’t know what to expect but I was so overwhelmed by the support and sense of female community in this group. It was so touching for me to realise that we all face similar challenges, and we can all relate to each other’s experiences in one way or another. This community, which I am sure will accompany me for the rest of my life, was one of the most valuable things I will take away from this workshop.”

36-year-old Fatemeh Sharif – participant at FLF in Qatar – has previously played in the Iran Futsal national team and is now continuing her development as the head coach of the women’s Futsal team in her homeland, which she hope will benefit in the future from the content of the FLF workshops in Doha.

“The ideas about management, leadership and culture that have been transferred to us at the FLF have opened new horizons for me, so that I will be able to be more successful as a coach from now on. These experiences will be the basis on my future successes. I will do my best to transfer what I’ve learned from these workshops to women in my own country.”

Heike Ullrich, General Secretary of the DFB is convinced of the relevance of FLF in the world of football and addressed personal words to all participants:

Heike Ullrich, Germany, said, “Let us be active, let us be the thorn in their side sometimes, but also stay strong, stay together as a group in order to let us spread our message: ‘Female leaders, we are strong!’ Female leaders will be an important part of leadership in the world of football in the future – I am certain of it.”