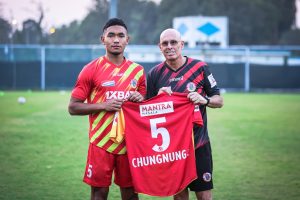 Kolkata giants East Bengal FC have announced that they have signed a permanent contract with defender Lalchungnunga until summer 2026.

Lalchungnunga in 2019 moved up from the juniors to the first team and since then has been part of their I-League and Mizoram Premier League squads before moving last season to join Sreenidi Deccan FC.

At the I-League newcomers Lalchungnunga impressed and he was signed on loan ahead of ISL – Season 9 by the red and gold, where he continued to impress and that has earned him a permanent three year contract.

Lalchungnunga on signing the contract said, “I am tremendously happy and honored to commit my long-term future with one of the historic Club of India, Emami East Bengal FC. I want to thank the Emami East Bengal board for trusting my abilities.”

“East Bengal is an emotion that binds us all together. I feel this is my family away from home, and I aim to give my best for this Club and our fans.”

Despite having a mixed season so far, Lalchungnunga has been one of the few bright spots for East Bengal FC.