Dominant India U-20 defeat Sri Lanka in SAFF U-20 Championship! 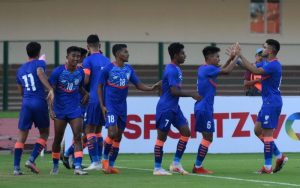 A dominant India U-20 registered their first victory in the ongoing SAFF U-20 Championship when they beat Sri Lanka U-20 4-0 at the Kalinga Stadium in Bhubaneswar on Friday, July 29.

The tireless Jangra, who wasn’t to be bogged down all throughout, followed a deep Parthiv Gogoi cross from the right and nodded it home to open the scoring five minutes after the interval.

Immediately thereafter, Jangra had another chance to double the lead two minutes later. But after being set-up in the clear by Vibin Mohanan, his first-time shot on goal was palmed away by an outstretched rival goalkeeper Shane Banuka.

The wait for the second goal, however, wasn’t that long — and it came in the 69th minute – this time Jangra turned feeder for Gogoi. Collecting it around the offensive third, Jangra, with the outstep of his foot, found Gogoi inside the rival box. An ice-cool Gogoi, trapped it, cut in as his rasping right footer bulged the net.

The third goal came three minutes later – in the 72nd minute. Gogoi’s volley hit Sidque Kalik’s hand and the referee pointed to the spot. Gurkirat Singh, who had failed to head into an empty net off a Jangra cross some minutes back, gleefully converted from the spot.

Gogoi completed the rout in 90+2 – and all he had to do was to tap it into the empty net after Gurkirat outran the entire rival defence to set it up for Gogoi.

The two changes by Head Coach Shanmugam Venkatesh at half-time – Gurkirat and Taison Singh coming in for Sajad Parray, and Harsh Patre — enabled India to go attack in numbers, and make the domination count.

Earlier in the first-half, the easiest chance fell to Jangra in the 36th minute but Banuka anticipated it right to deny him. The nimble-footed Brajesh Giri, despite the jungle of legs, had managed to find Jangra at the top of the box. The latter sidestepped his marker with a deft first touch, but with just the Lankan goalkeeper to beat, Jangra shot directly at Banuka. Much in frustration, Giri was booked by the referee the very next minute for a nasty foul.

Jangra also picked up a yellow in the 81st minute, and was substituted two minutes later.

A minute’s silence was observed prior to the kick-off in memory of Late Gulab Chauhan, former member AIFF Executive Committee and FIFA Referee, also Hony, Secretary, Gujarat State Football Association who passed away yesterday on July 28, 2022.