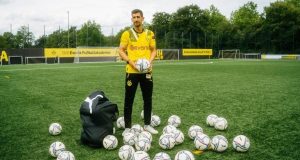 Out of nowhere, Nobby Dickel scores the equaliser in the 1989 DFB Pokal final, and also the 3-1 in the cup victory over Werder Bremen. With his two goals he becomes the “Hero of Berlin”.

The cup jersey of the 2022/23 season that the Borussia Dortmund’s players will wear in the UEFA Champions League and the German Cup (DFB Pokal) is reminiscent of the 89 cup jersey in which the team achieved great success and brought the cup to the Borsigplatz.

But Borussia Dortmund’s heroes are not always on the pitch, in the public eye and in the newspapers. Dortmund’s heroes are also the people behind the club who contribute to BVB through their actions. They train our young talents, provide security around the games or equip our teams with the right outfits.

Dortmund’s heroes are the people who give everything for their passion. They live the enthusiasm for football and BVB. Each of them is part of the club and contributes in their own way to making Borussia Dortmund what we are.