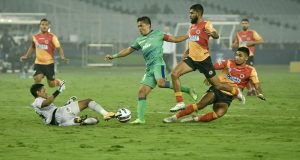 A Cleiton Silva free-kick in additional time (90+3′) gave East Bengal a 2-1 win over Bengaluru FC at the Saltlake Stadium in Kolkata on Friday. Silva had given the hosts a lead in the first half (39′) from the spot, before Javi Hernandez made it 1-1 (55′) to bring Bengaluru right back into the game. However, the Brazilian’s unstoppable take from a set-piece with only a minute left on the clock, gave Stephen Constantine’s men all points at home.

Earlier, Spaniard Pablo Perez was handed his first start since signing for Bengaluru earlier this month, while Alan Costa – who came on for an injured Aleksandar Jovanovic in the game against Hyderabad FC – partnered Sandesh Jhingan and Parag Shrivas in defence.

The Blues came close to scoring in quick succession when Roy Krishna saw his shot on target saved by ‘keeper Suvam Sen. Sunil Chhetri then saw his goal-bound low header from the subsequent corner, come off a red and gold shirt, off the line.

It was East Bengal who went ahead in the 39th minute after Bengaluru conceded a penalty in an unfortunate manner. Chasing VP Suhair down in the Blues’ box, Roshan Singh’s attempt to halt his slide saw the ball hit the defender’s hand as referee Rahul Kumar Gupta pointed to the spot. Silva, who scored in the reverse leg of the fixture, sent Gurpreet Singh Sandhu the wrong way to give the hosts the lead.

Bengaluru needed a way back into the game, and Hernandez turned up with the answers, scoring his fourth goal of the season. The Spaniard began a move that saw Krishna chase down the ball before playing the perfect cut-back that Hernandez met and finished with composure to make it 1-1.

With 20 minutes left to play, Grayson rang in his first changes of the game, throwing on Udanta Singh for Roshan, and replacing Perez with Rohit Kumar. The Englishman soon made another double change, bringing on Danish Farooq and Sivasakthi Narayanan for Suresh Wangjam and Chhetri, as Bengaluru kept pushing for the winner.

But it was Silva and East Bengal who would have the final say with the Brazilian picking the top corner to send in his free-kick that Gurpreet did everything to get to, but fell short. The win took the Kolkata side above Bengaluru in 8th position on the table.

Bengaluru next travel to Guwahati to take on NorthEast United on January 6.