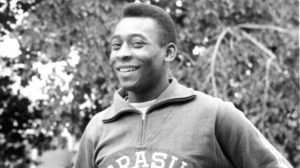 The football world has lost one of the greatest players of all time. Three-time FIFA World Cup winner Pele sadly passed away aged 82 on Thursday. DFB president Bernd Neuendorf, DFB general secretary Heike Ullrich and national team coach Hansi Flick all expressed their condolences after the passing of the Brazilian great.

DFB president Bernd Neuendorf said, “The news of Pelé’s death has filled everyone at the DFB with great sadness. Football has lost one of the true greats. Pelé’s impact extended much further than just the pitch, he was an icon for generations of people. He remains the only player to have ever won three World Cups. He excited and entertained people around the whole world, even those who weren’t interested in football. Pelé made football look easy with his elegance, finesse, pace and technique. He helped shape a large part of football history and will always remain one of the key figures of the sport and his country. His name is connected with the beauty and magic of the game, and all that which makes this sport so attractive and exciting.”

DFB general secretary Heike Ullrich said, “Pele’s death is extremely sad. He had a special aura about him, which people who never even saw him play could still sense. He had such a natural warmth. There probably will never be a perfect footballer, but Pelé is the first person that comes to mind when I think about who comes closest. It was clear to everyone how much he loved football – he shaped the sport for many years, more than most people before or after him. It was therefore no surprise that FIFA named him as the Footballer of the 20th Century alongside Diego Maradona, someone else we have also lost. The football world is definitely worse off without them.”

National coach Hansi Flick said, “There has never been a better player than Pelé. He was and still is the king of football. His game was close to perfection. He was a complete player and had no weaknesses. Pelé scored goals with his right foot, his head, his left foot, with precision, with power, with individual brilliance and in spectacular fashion – he could do it all. He wasn’t just a goalscorer though, he also shone with his eye for a teammate. His passes and assists were as impressive as his goals. Football was his best friend and vice versa. Pelé leaves behind a hole that can never be fillled.”