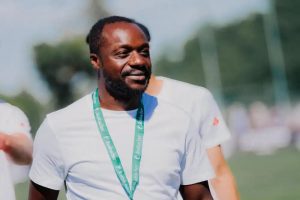 Ben Manga, director of professional football at Eintracht Frankfurt Fußball AG, will leave the club with immediate effect after both parties mutually agreed to terminate his contract, which was due to run until 2026.

In trusting and constructive discussions with the Eintracht Frankfurt Fußball AG board, the 48-year-old recently expressed his desire to leave the club. In light of Manga’s service over the last few years, his request was granted. Manga joined Eintracht in 2016 and initially worked under former board member for sport Fredi Bobic as chief scout and squad planner. Over the last six and a half years he was involved in the development and shaping of the scouting department and the corresponding transfer policy.

Ben has done exceptional work in his role as chief scout over the last few years and has played a major part in our success.

“Ben has done exceptional work in his role as chief scout over the last few years and has played a major part in our success,” said board member for sport Markus Krösche. “That deserves our absolute respect and recognition. Six and a half years are a long time in football. That makes it all the more important that his departure is amicable and respectful. The same goes for all our colleagues in the scouting department who will leave us as part of this process. We thank them all for the good working relationship and wish them all the best for the future.”

“I would like to say thank you for six and a half wonderful years at Eintracht,” said Manga. “There were many wonderful moments and great successes to celebrate. For me it was a very intensive and unforgettable time, but now I would like to start a new chapter. This was not a decision against Eintracht; instead it was one for a new path. I would like to thank the club management for the constructive and respectful discussions. It’s very important to me that we part on good terms.”