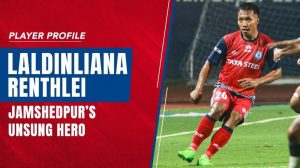 There may be several young players making their name in Indian football, but few have caught the eye like young Laldinliana Renthlei has in a very short period of time.

Born in Mizoram, the boy known as “Dinliana” picked up the sport of football at a young age, and like many of his peers, made a name for himself in the lucrative Mizoram Premier League tournament.

A Championship winning season with Chhinga Veng in 2017-18 brought Dinliana into the spotlight and earned him a move to Mizoram giants Aizawl FC, where his career really kicked off. A Indian Super League move to Chennaiyin FC followed, and the young right back was suddenly the talk of town.

Dinliana’s talents were spotted by former Bolton Wanderers and Burnley head coach Owen Coyle at the Marina Machans, who then brought the 24-year-old to Jamshedpur FC, writing the next chapter in the youngster’s career.

Dinliana repaid the faith shown in him by Coyle, becoming a significant part of the Jamshedpur squad, and helping the team lift the ISL shield at the end of the 2021-22 campaign. The defender has often been described as tenacious and proved this by racking up the second highest number of successful tackles (28) in the shield-winning season for Jamshedpur FC.

This season, despite a few injury setbacks, Dinliana is now back and ready to show his class as the Men of Steel look to kick start their campaign. The fans have been firmly by the side of the man from the Northeast, and his return to fitness against East Bengal was met with relief and excitement from the entire Jamshedpur family.

With more than half of the season still to play, Dinliana might very well prove to be the difference and help Jamshedpur FC scale even newer heights this season.