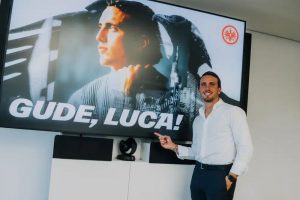 Eintracht Frankfurt and Juventus FC have reached an agreement for the loan of Luca Pellegrini. The Italian will join Eintracht for the 2022/23 season.

The Rome native rose through the youth ranks at AS Roma between 2011 and 2018 before making the step up to the first-team squad. Following a six-month loan at Cagliari Calcio, he moved to Juventus in summer 2019.

Further loans ensued, at Cagliari and CFC Genoa, before the 23-year-old made 21 competitive outings for Juventus last season, helping them win the Italian Coppa Italia.

All told, Pellegrini has made 69 Serie A appearances to date. The 1.78-metre defender counts his strength in the tackle, crossing, set-piece deliveries and pace among his chief attributes.

“Lucas Pellegrini can operate in both defensive positions on the left flank, be it in front of a three-man backline or a little deeper in a back four,” said Eintracht board member for sport Markus Krösche. “He will give us more variety in our build-up play and increase our flexibility overall.”