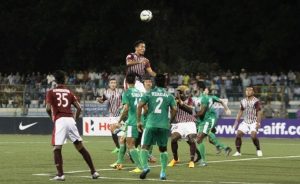 Mohun Bagan AC crushed Salgaocar FC’s Hero Federation Cup hopes as they cruised to a 4-0 win at the Barasat Municipal Stadium on Thursday evening. The Mariners scored through Katsumi Yusa (25′), who broke the deadlock before Sony Norde’s brace (45’+1′, 52′) and Jeje Lalpekhlua’s strike (90’+4′) added to the score.

The Greens side had two new faces than that of the previous fixture in the form of Nicolau Colaco and Leny Pereira who replaced Keenan Almeida and Augustin Fernandes respectively. While Sony Norde, Azharuddin Mallick and Bikramjit Singh made it to the starting line-up of the Kolkata side.

Mohun Bagan had made their intentions clear in the opening minutes of the game. Karanjit Singh denied Jeje’s first attempt and Eder Monteiro put himself in between the ball and the goal on the second. The game from then on went from end-to-end with both teams squandering possession before making any solid attempt. Mariners’ skipper Yusa broke the deadlock in the 25th minute as he obliged Norde’s cross after the latter darted goal-wards down the left flank. Just across the half-hour mark the Greens had their best chance of the game after Calvin Mbarga failed to capitalise on a dangerous cross from Martin Scott who latched onto Kinshuk Debnath’s poor clearance and whipped it in which the former sent above the goal-post. In the dying minutes of the first-half Katsumi returned Norde’s earlier favour to double the Mohun Bagan scoreline.

The second half was no different for the hosts as Hero of the Match Norde completed his brace despite Karanjit getting a hand on it the ball found the right corner of the goal. In the 65th minute Salgaocar were denied by the woodwork as Scott’s lobbed ball into the area saw Darryl Duffy head it onto the crossbar another attempt from just outside the box by Jackichand also hit the woodwork. Seityasen Singh’s shot from range five minutes later then went just wide as the away team struggled to claw their way back into the game.

Jeje sealed the evening with the fourth goal in stoppage time as he beat Karanjit with ease. Mohun Bagan now advances into the semifinals to face Shillong Lajong FC.