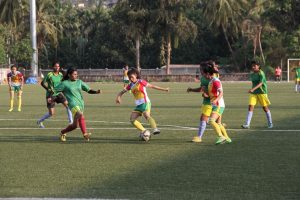 Tibet Women’s football team defeated Viva North, Goa with a very convincingly 4-0 victory to seal their place in the final against Goa XI. Tibet Women’s team played some really good football and controlled the tempo of the entire match. Tibet’s captain Jamyang Chotso opened the scoring in the 6th minute for Tibet with a good goal after receiving a nice through pass from Tsewang Dolma on the left flank. Chotso received the ball from just on top of the box and dribbled past 2 defenders and made a deft placement of the ball to find the back of the net.
In the 11th minute, Tibet got a free-kick from just outside the D area. Ngawang Otsoe stepped up and scored a beauty of a goal with a brilliant free-kick that gave the Viva North goalkeeper no chance. Sonam Dolma worked tirelessly for the Tibet team on the right flank and Ngawang Otsoe marshalled the midfield area for Tibet. Rekha Bali and Anika D’souza played a good match for Viva North in defence and denied Tibet many goal scoring opportunities.  Tibet lead 2-0 at the halfway mark
Viva North started the 2nd half in a much better fashion and tried hard to pull a goal back but Yangdon Lhamo and Lhakda Bhuti stood strong in defence for Tibet. In the run of play Sonam Dolma made a fine run on the left flank and gave a nice cross to Jamyang Chotso who unleased a nice volley from just outside the box to put Tibet up 3-0. Dhondup Lhamo got the 4th for Tibet few minutes later with a solo effort by dribbling past 2 defenders and placing the ball in the far corner for a superb goal.
Viva North girls put up a good display with four Indian internationals within their ranks but lacked the killer instinct. Viva North had their share of chances but lady luck was just not on their side and the target eluded them. Viva’s Mansi Haldankar and Cliantha D’Costa had the best chances to reduce the margin for the team towards the fag end of the match but Tibet goalkeeper Tenzin Dekyong managed to thwart the effort in a one to one situation.
The final between Tibet Women’s Football team v/s Goa XI will be played on Saturday May 7 at 4:45pm at Duler Stadium in Mapusa.
Share