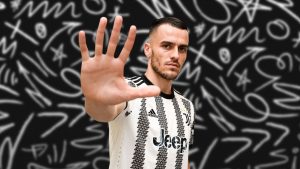 One of Eintracht Frankfurt’s UEFA Europa League triumph heros in Serbian Filip Kostic has left to sign for Juventus FC.

A player possessed of talent, strength and speed, able to cover the entire flank. The naturally left-footed wide player has shown over the years that he can play in every area of ​​the pitch, but prefers to throw himself in attack, dishing assists when required.

The 29-year-old Serb is now a Juventus FC player, having signed a contract that ties him to the club until June 2026.

Agreement with Eintracht Frankfurt has been reached for the definitive acquisition of the player Filip Kostić.

His career started in his native Serbia in 2010. Then, between 2012 and today, he stopped off in Holland, at FC Groningen for three seasons, and Germany, with two seasons first at VfB Stuttgart, as many at Hamburger SV and since 2018 at Eintracht Frankfurt.

In all competitions he has accumulated 409 appearances and 67 goals. Since his Bundesliga debut with Stuttgart in 2014/15, Filip in his 249 games in the German top flight is the midfielder that has provided most assists – 58, at least four more than any other player over the same period. Since joining Eintracht, where he won the Europa League last season, in Europe’s top five leagues, only Thomas Müller (68) and Lionel Messi (58) have provided more assists.

Let’s not forget his finishing touch. Kostić is the only midfielder to have scored at least four goals in each of the last seven Bundesliga seasons, from 2015/16 to 2021/22. Last season, meanwhile, he was the player that created most chances, 87, and supplied most crosses from open play, 218.

From today his life has taken on a definitive black and white shade.