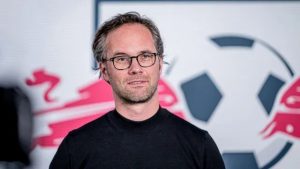 Florian Scholz will leave RB Leipzig at the end of March 2023 to pursue an independent career as a consultant in the field of sports, marketing and communications.

Florian Scholz started his work at RB Leipzig on July 1, 2015 as Head of Department of PR & Media. Since August 2020, he has been responsible for the commercial management in the Sports division in addition to his role as CMO (Chief Media Officer).

In his role, Florian Scholz, as part of the management team, contributed to the great successes both in the 2020/21 season (qualifying for the UEFA Champions League and reaching the DFB Cup final) and in the most recent 2021/22 season (reaching the UEFA Champions League again as well as the semifinals of the UEFA Europa League) and ultimately celebrated the greatest success in the club’s history to date in winning the DFB-Pokal.

Alongside very good transfer windows, these successes on the pitch also bear Florian Scholz’s mark and for this he deserves great praise and gratitude from the entire club.

It is with a heavy heart that RB Leipzig has complied with his wish to develop his career elsewhere.

RB Leipzig wishes Florian Scholz only the best in his professional and private future!

Florian Scholz said, “I am excited about this opportunity and chance to explore new professional fields. This is not only my wish and the next step, but also the right time after almost eight years with so many emotional moments and successes.”

“I would like to express my sincere thanks to my colleagues, the players, and especially the fans, with whom we as a club, but also each individually, have grown together. It’s been an outstanding and wonderful journey so far – in my new role, I’m looking forward to more exciting topics in the sports world and wish everyone at RB Leipzig well and further success.”