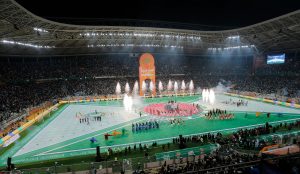 FIFA President Gianni Infantino was present as the seventh edition of the African Nations Championship (CHAN) got under way with a spectacular opening ceremony and a victory for the hosts at the brand-new Nelson Mandela Stadium in Algiers, Algeria.

Earlier in the week President Infantino had been present at the official inauguration ceremony of the 40,000-seater stadium, which located on the south side of the Algerian capital. For the opening game the FIFA President joined dignitaries including Prime Minister of Algeria H.E. Aimene Benabderrahmane, Confederation of African Football (CAF) President and FIFA Vice-President Patrice Motsepe, President of the Algerian Football Association (FAF) Djahid Zefizef and Mandla Mandela, grandson of the first President of South Africa, Nelson Mandela, whom the stadium is named after.

“It is a great privilege to be present here tonight for this historic moment in Algerian, and African, football history,” President Infantino said. “We have seen at the recent FIFA World Cup in Qatar how the levels of teams from this beautiful continent continue to progress at great speed. Tournaments and facilities such as this magnificent new stadium are another positive step on that journey. I congratulate our hosts Algeria for organising this African Nations Championship and look forward to the three weeks of wonderful football ahead.”

Following an opening ceremony that featured a series of cultural and musical displays showcasing the history and traditions of Algeria – the host nation delighted the full-to-capacity crowd with a 1-0 victory against Libya.

The competition – which is exclusively for domestic-based players – takes place across four Algerian cities including the capital Algiers, together with Annaba, Constantine and Oran, and will conclude at the same venue in which it started on Saturday, February 4, 2023.

The 2022 FIFA Club World Cup – Morocco official emblem has been unveiled. With the …