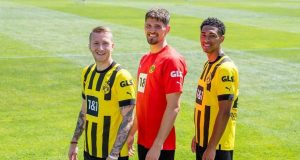 The parcel and express service GLS Germany is strengthening its partnership with Borussia Dortmund. GLS, a BVB Champion Partner and the official logistics partner of the eight-time German champions since July 2021, will be sleeve sponsors in national as well as international competitions going forward.

Having worked together for a year, the partners are now taking the next step: GLS will have a presence on BVB’s shirt sleeves in every match going forward. In addition to that, the logo will also feature on the shirt sleeves of all the youth and junior teams plus the women’s teams, whose senior team was promoted to the Bezirksliga in their debut season.

GLS has particularly caught the eye in BVB’s appearances in UEFA’s European club competitions and the DFB-Pokal (German Cup), with the logistics provider’s new logo featuring on the senior team’s shirt sleeves in the aforementioned competitions. In the first season, GLS already positioned itself as an active and committed partner via this strong media presence and numerous additional activations – including a TV commercial that garnered much attention and starred BVB players Gregor Kobel and Gio Reyna.

Carsten Cramer, the BVB Managing Director for Sales & Marketing, described the expansion of the partnership as follows: “We’re excited to be intensifying our future cooperation with a partner that takes a bold and unconventional approach in its industry and is not just out to maintain the status quo. The first year of our partnership has been characterised by a good-natured cooperation and a range of projects that we also want to continue in the new season in order to breathe even more life than before into the partnership. All BVB fans can already look forward to that.”

“A sponsorship commitment of this magnitude represented uncharted territory for us, but the impressive results yielded in many areas surpassed our expectations. We very much appreciate our cooperation with BVB and are proud to work together even more closely,” was the positive conclusion drawn by GLS marketing director Jascha Waffender.

All newly sold Bundesliga shirts may be purchased with an optional GLS logo on the sleeve. Anyone who has already bought a shirt can subsequently add the GLS logo to it in the stationary Fan Shops. Online orders unfortunately cannot be returned, but fans who have purchased their shirt online can of course also visit a Fan Shop and request the addition of the logo to the shirt.