Hyderabad FC kick off 2023 against FC Goa at Fatorda! 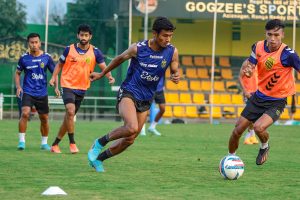 After finishing 2022 on a high, Hyderabad FC return to the scene of their Indian Super League triumph this week, when they take on FC Goa in a promising clash at the Pandit Jawaharlal Nehru Stadium in Fatorda this Thursday.

Manolo Marquez’s men are currently second in the league table with 28 points, and will look to put pressure on league leaders Mumbai City, who have a two-point lead.

The Gaurs have now taken just a point from their last two games, and will look to climb up the points table with a positive result in this game.

The likes of Iker Guarrotxena, Edu Bedia, Brandon Fernandes, Anwar Ali, Marc Valiente and Noah Sadaoui have all been in fine form in recent games. Dheeraj Singh has also been impressive in goal and could prove to be a tough nut to crack in this game.

Carlos Pena’s side fell to a 0-1 defeat in the reverse fixture in Hyderabad, but Hyderabad FC head coach Manolo Marquez believes that it was one of the only games that his side did not truly deserve to win.

With goals coming in from all around the field, Hyderabad FC have the second best attack and the best defense in the league going into this game.

Javi Siverio, the current top goal scorer for Hyderabad FC, along with Bartholomew Ogbeche, Joel Chianese and Borja Herrera are on the top of their game at the moment while Halicharan Narzary and Mohammad Yasir have proven too hot to handle throughout this campaign.

The likes of Akash Mishra, Odei Onaindia, Nim Dorjee Tamang, Chinglensana Singh and Nikhil Poojary have all done exceptionally well at the back with Gurmeet Singh showing great resilience in front of goal.

Hyderabad FC will hope to put in a strong performance at Fatorda, a ground they fondly remember. But they will have to be at the top of their game, hints Manolo Marquez.

“You have to play really well against a team like FC Goa. If we repeat our performance from the reverse leg, it could be really tough for us. We need to have a good and strong performance and that is what we are preparing for,” added the Spaniard.

The game kicks-off at 7:30pm IST on Thursday and will be telecasted live on the Star Sports Network with live streaming on Disney+ Hotstar and JioTV.