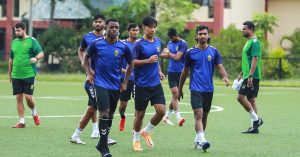 Hyderabad FC are back in action for the first time since lifting the Indian Super League trophy back in March when they take on TRAU FC in their first group stage game of the 2022 Durand Cup campaign on Monday, August 22.

Hyderabad FC are drawn in Group C in the 131st edition of the prestigious competition, where they take on the local I-League side at the Khuman Lampak Stadium in Imphal, Manipur.

Hyderabad FC who arrived to the city on Saturday, have named a strong squad for their Durand Cup campaign, with all six overseas players gunning to make a mark.

Manolo’s men will look to make a strong start to the group stage with tough games coming up in quick succession.

TRAU FC started their campaign with a 1-3 defeat to NEROCA FC in an Imphal derby on Thursday, last week.

With plenty of quality in their ranks, L. Nandakumar Singh’s side will look to bounce back with a strong performance against Hyderabad in this clash.

The conditions in Imphal could also play a role on Monday as the threat of rainfall looms large over this clash.

The game kicks off at 3pm IST, and will be telecasted live on Sports 18 and streamed on VOOT app.