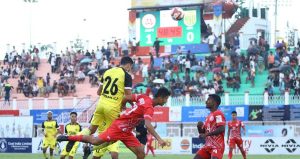 After three back-to-back victories in the Group Stage of the Durand Cup campaign, Manolo Marquez’s Hyderabad FC tasted their first defeat, as they lost 0-1 to Army Red FT, in their final group game here at the Khuman Lampak Stadium on Saturday.

Suresh Methei, the skipper of the Services’ side scored with a glancing header in the 33rd minute, which turned out to be the only goal on a tough evening in Imphal.

The likes of Halicharan Narzary, Lalchungnunga Chhangte, Borja Herrera, Aaren D’Silva and Javi Siverio, coming off the bench, all came close on a fair-few occasions, but HFC failed to find the back of the net for the first time in this campaign.

Bhabindra Sureshi, the shot-stopper for Army Red FT was at the top of his game, as he made five superb saves to deny HFC throughout the evening. His contribution to helping Army Red to their first win of the campaign, saw him named the ‘Player of the Match’ on the evening.

Hyderabad FC are back in action in the Durand Cup Quarterfinal, with the dates and venues yet to be announced.